IFoA Chief Executive to step down

Derek Cribb will leave after almost a decade leading the IFoA 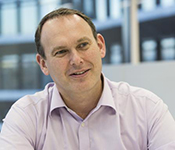 The Institute and Faculty of Actuaries (IFoA) has announced that its Chief Executive, Derek Cribb, will be leaving the organisation at the end of 2019, after almost 10 years in the role.

Derek Cribb joined the IFoA in 2010, at the time of the merger between the Institute of Actuaries and the Faculty of Actuaries. He has led the executive through a period of great change at the IFoA, including a fundamental review of the IFoA strategy and a re-branding of the organisation in 2013. Under his leadership the organisation has attracted a strong and talented executive team that has developed an effective partnering culture with member volunteers.

Derek has overseen the expansion into a number of new areas and the development of the IFoA’s global footprint, including a globalisation of its education offering and being the first non domestic actuarial association to open offices in Beijing and Singapore. He also played an important part in the development, launch and growth of CAA Global as a joint venture with the Society of Actuaries in the US to create the new qualification of Certified Actuarial Analyst. Membership during Derek’s tenure at the IFoA has grown over 50% to 32,000 today, bringing a new level of sustainability to the IFoA.

Having chaired both the IFoA’s Markets Development Board and its Policy and Public Affairs Board, Derek has also been a pivotal partner with volunteers in raising the profile of the IFoA within and outside the profession, increasing the IFoA’s influence such that it is a body whose advice today is sought by government and regulators.

The IFoA’s Management Board will be starting the search for a new CEO as soon as possible.

Grahame Stott, Chair of the IFoA’s Management Board, said:

“The departure of a CEO after such a long period of continuity is a significant event for the organisation. The IFoA, and the actuarial profession, owe Derek a debt of gratitude for his part in modernising and growing the professional body to have the influence and breadth of services it provides today.

“However, change also brings opportunity, and the IFoA will now begin the search for the next CEO who, together with the existing strong executive team and the volunteers, can take the organisation to its next stage of development.”

“The profession is evolving at pace, and being part of the team that has led a transformation in the IFoA enabling it to consolidate its place as a sustainable and leading global actuarial professional body has been a joy. Building a highly capable and passionate team that can take the organisation forward with the volunteers has been a highlight, and I will remain a lifelong ambassador for the actuarial profession and the great work done by the IFoA in the public interest.”

For out of hours, the Press Office can be contacted at: press.office@actuaries.org.uk. We aim to respond to all enquiries as quickly as possible.